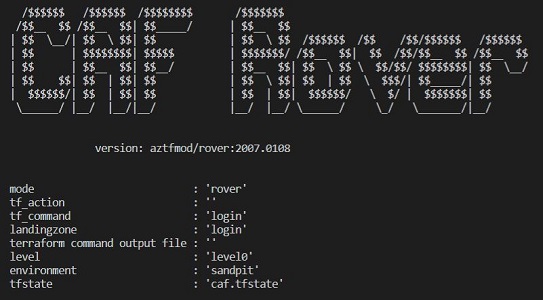 A kickstart to the development of Terraform based Landing Zones following Azure’s Cloud Adoption Framework.

Within the past year or so Microsoft has put a lot of effort into documenting best practices and guidelines for customers embarking on their journey with Azure. This is called the Microsoft Cloud Adoption Framework for Azure (CAF). Simultaneously, they’ve started to roll out some tools and concepts to make it easier to jump in.

Landing Zones, on the other hand, is a concept that was introduced by AWS a few years ago. It’s an abstract idea although AWS tried to implement and sell it as a ready-made solution, with poor success. I’m not the best person to describe them, but you can check this excellent post blog on the topic. Essentially they’re just a way to layer the building blocks of your cloud infrastructure. The technology used for implementing the IaC for Landing Zones is entirely up to you.

I started to investigate the Azure Cloud Adoption Framework landing zones for Terraform for a customer case this spring. They were planning to use Azure DevOps as the CI/CD tool. I had to figure out a lot of things before I could concentrate on developing the actual Landing Zones so I figured to share my view on this.

So what are these? With Terraform, when you start to build the IaC you most likely need a remote state. Then it would be also nice to have a place to store some secrets. There’s your Launchpad. And Rover is a simple tool for deploying Terraform based landing zones, including the launchpad (level0). Both are provided by some MS folks for our convenience.

Since we’re dealing with mainly IaC here it’s not mandatory to use Rover of course. This is pure Terraform stuff. But this so-called bootstrapping of Terraform’s remote state and managing few credentials is something you’d need to handle in any case, one way or another.

I recommend starting to use Rover from the get-go. Microsoft has done a great job of wrapping the tool into a Dev Container. All you have to install in your local machine is Docker and VSCode with a couple of extensions. Using the Dev Container you have all the tools needed to start developing Terraform based Landing Zones.

Check the getting started guide for detailed instructions.

A quick start directly from Rover

I’ve created a simple landing zone example that we use as a reference here. It contains a simple Azure policy for requiring a specific tag for resource groups.

What we’re going to do

4) Create new ADO project, import the example git repo to ADO and then clone it to Rover container

You can only have one Launchpad per Azure subscription. This is by design.

Now that you’ve seen how to deploy a landing zone locally using Rover you’re probably wondering how to do the same from CI/CD. Azure DevOps provides hosted agents which are the quickest way to get started with your Azure Pipelines. CAF TF landing zones documentation contains instructions for this nowadays but it still only covers the more complex approach, using a self-hosted ADO agent.

You don’t want to spend time at the beginning of a project setting up a build machine just to get started.

Since deployment from the local environment is done in container context, the same should apply to the pipeline as well. ADO supports container-based CI/CD pipelines - they’re called YAML pipelines. Just make sure to use the same container image that your Dev Container uses.

Note: The Rover tool is developed actively and version changes over time.

My solution for ADO hosted agents

After a lot of testing and troubleshooting, I managed to get Rover function properly with ADO hosted agents. Sigh, I wish YAML pipelines would support dry runs from the local machine. Maybe one day.

Here’s MVP of azure-pipelines.yml for enabling continuous deployment to the dev environment

These are the main challenges I had to tackle

The first thing you need is a Service Principal to serve as the identity for the pipeline.

There are two different versions of the Launchpad

I haven’t tested the heavier version yet but so far the light version has been enough for my needs. The documentation on the security requirements for initializing the Launchpad is described here but for launchpad_opensource_light it’s only stated the Service Principal (SP) requires a Contributor RBAC role on the Azure subscription level.

I figure the launchpad’s implementation has changed since because there were additional permissions needed for the SP that finally got things working properly. You can check my Terraform code for more details.

Long story short: I ended up implementing the bootsrap for the SP itself using Terraform.

Setting up the pipeline

Here are instructions on how to get your pipeline set up with ease. I’ve spent some extra time making sure the example really works.